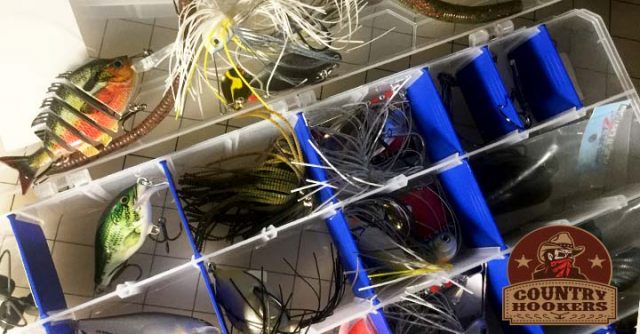 If you’re like most bass anglers, you probably have tackle box stacked on top of tackle box full of hooks, lure, secret baits, and gadgets that are all guaranteed to catch fish – well at least that’s what the package said when you bought the lure.

But finding the perfect bass lure can be a challenge. Ask a hundred fisherman what their favorite bass bait is, and you are probably going to get a hundred different answers – ask them during the pre-spawn, the brutally frigid winter months, or when the summer heat is almost unbearable, and well, all bets are out the window.

Finding the best bass lure is part science, part personal preference, and probably a bit of voodoo magic thrown in as well.

So what lures catch the most bass?

There are an endless number of different hard baits, soft baits, swimbaits, topwater and brands to choose from, but if you’re looking for a lure that will reliably catch bass after bass, then you need to check out some of these tried and true bass fishing lures that will catch bass throughout any season.

The Skirted Jig & or The Jig n’ Pig Combo

If you’re looking for a goto lure that can be used year round, then it doesn’t get much better than a skirted lure. Throw on some sort of creature bait trailer (sometimes called the Jig n Pig), and you have yourself an unstoppable combo that is guaranteed to produce results.

How do you fish a Skirted Jig?

Nine times out of ten I’m going to fish them with some sort of trailer. Skirted Jigs are meant to mimic the action of a crawdad, so most of the time you are going to run them slow along the bottom, periodically popping them around rocks, logs, and other bottom water structure.

But don’t let the slow and low technique hold you back from experimenting. The Jig n’ Pig combo is an awesome flipping and pitching combo that can be thrown into heavy vegetation and structure. Most of the time you will nail the bass on the fall, making this an excellent lure to quickly work structure, docks, and areas like tules or dense cover.

There isn’t a Bass Angler out there that doesn’t have a variety of crankbaits in his arsenal of bass lures. If you’re looking to cover a lot of water at various depths, then a crankbait is a great search bait to throw.

How to Fish a Crankbait:

Crankbaits are pretty darn easy to fish. The most straightforward method is to just run it back with a slow, simple retrieve, but varying up the action and adding in a couple pauses, twitches and speeds can sometimes be the thing that turns a slow bite into a day you’ll never forget.

The depth of your crankbait is going to depend on what you’re throwing, but in general, they come in three categories: Squarebills and Shallow Divers ( 0-6 feet) Medium Divers 6-12 feet) and Deep Divers which will run 12 feet and deeper.

Where to fish a Crankbait:

This is where most people get it wrong. I see a lot of people burning their crankbaits through open water; while this might catch the random bass, most of your strikes are going to come when the crankbait deflects off of some type of structure or off the floor. And don’t be afraid to fish them through cover. Yes, you’re going to catch some snags, and you’re going to be cleaning the hooks, but if you shy away from cover you’re removing yourself from areas where the bass are sitting.

Some of our Favorite Crankbiats:

Whether it’s a Senko, a Yum Dinger, or some other knockoff, Plastic Stick baits are some of the most effective, versatile, and deadly bass baits on the market. In my opinion, and I say this based on personal experience, there isn’t a better bait out there. I’ve caught more bass on Senkos and Yum Dingers than any other lure I use. Weightless, Texas rigged, Carolina-rigged, drop shot, internally nail weighted, weedless, wacky, tossed into cover, you name it, Plastic Stickbaits catch fish; lots of fish!

How to Fish a Stick Bait Worm:

There are a ton of different techniques, but by far the most popular and effective method to fish a plastic stick bait is to wacky rig it and let it drop slowly into your target zone.

When to throw a Senko (stickbait).

There’s never a wrong time to fish with a Senko style bait; these bad boys produce results year round and are one of the most versatile baits that you can have in your tackle box. Check out our article on Fishing Stickbaits for more techniques.

Spinnerbaits are another one of those lures that almost anyone can throw and have a good amount of success even with limited experience. That being said, the more you fish them and the more familiar you are with varying your retrieve and mixing up your action the more successful you will be.

How do you fish a Spinnerbait?

Just like a crankbait, a simple, straightforward retrieve is the easiest method of fishing one of these lures. Unlike a crankbait, you usually want to fish these suckers pretty fast. You can change your depth by using different weights; heavier spinnerbaits will run deeper and lighter ones will run just below the surface with the blades barely breaking the water.

Adding some action: To mix things up and produce better results, try running the Run spinnerbait into structure like docks, logs, rocks, or through vegetation. The erratic motion of the lure usually helps trigger more strikes. If you’re fishing deep or open water without a lot of structure, give the bait some sporadic jerks or small pauses to create the similar effect.

When and where to Fish Spinnerbaits:

They can be thrown pretty much year-round, but I really like throwing them on days where the wind starts to pick up — with high wind, these baits can be especially lethal. During the colder months, just like most baits you are going to want to slow down your retrieve.

I know we mentioned Senkos above, but I really consider them to be in a different category than most other plastic worms. Plastic worms can be fished wacky rigged like a Senko, but there really are hundreds of ways to rig and fish these types of baits.

How do you Fish a Plastic Worm?

This question alone could produce about a thousand different articles (here’s one on how to put them on a hook). From Texas rigged. Wacky Rigged, or Carolina Rigged to weightless options or shaky head Jigs, this small little plastic worm is one of the most versatile lures in your tackle box. Dedicate a couple of trips to fishing with only soft plastics, and I guarantee you will be a far better angler for it.

When and where to Fish Plastic Worms:

The only time I really switch things up is during the late fall and winter when bass tend to become lethargic. Once things start slowing down, I typically start throwing all of my soft plastics weightless. The slower fall makes them easier to pick off and is more inviting to bass in colder waters. During the coldest winter months, I’m probably going to put some weight back on there, but only so I can get the worm down deep. Once it hits bottom, it’s a slow painful process – I’ll give it a jerk here and there, but sometimes your just dead sticking it more than anything.

You want to experience something that you will never forget, then throw a topwater frog into some heavy cover and hold on. There’s just something about the feeling of a monster bass hitting a frog that will make you love these lures more than anything else in your tackle box.

How to Bass Fish with Frogs

Typically, frogs are going to be fished over grass mats, lilypads, scum, or chucked into heavy cover or through tall grass. Wherever I throw it, I usually pause and let it sit for at least a couple of seconds. Often you’ll have a blow up almost as soon as it hits the water. If you don’t make it hop along the water using short, hard, fast, sideways jerks on your rod. I usually do about three to five at a time followed by a short pause. The blowup usually happens on these pauses.

Hooksets are a little different with frogs, as you don’t want to set the hook too quickly. It’s hard not to set the hook with how vicious topwater hits usually are, but you want to give the bass a second or two to really swallow that frog.

When to Fish a Topwater Frog

I throw most of my topwater baits from Spring through the Fall. In most cases, this is really more of a warm weather bait.

Sometimes buzzbaits almost feel like cheating. They’re extremely easy to fish, and something about the action the produce just drives bass crazy.

How to fish a Buzzbait:

These are one of the simplest lures to fish. Chuck them out there, and then just burn them fast along the top of the water. My favorite place to throw them is right above heavy cover, where other lures might have a hard time. They are a great way to find fish lurking in the shallows, or bringing the lunkers out of heavy cover. One thing you want to do is add a trailer hook to your buzzbait other wise you are going to miss a lot of fish on short strikes.

When to Fish a Buzzbait

Buzzbaits are another warm weather lure, I generally fish them between the spring and fall months, with summer usually producing the best results.