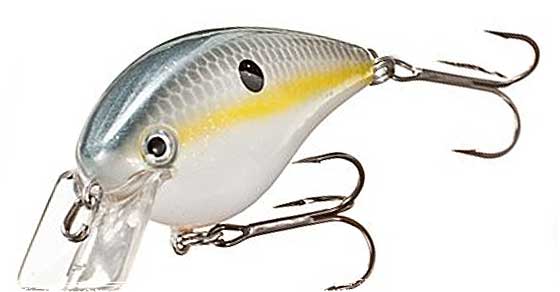 Square Bill crankbaits have got a lot of attention lately, but they’re really not that new. In fact, they’re one of the oldest crankbait designs on the market. That being said, don’t let their age make you think they’re irrelevant because they still pack a powerful punch and should be one of the top tools in your bass fishing arsenal.

Well, it’s really the square bill that gives this lure its unique action. A Square Bill Crankbait has a downward angle that gives the lure a very wide wobble, creating a unique action that drives the bass crazy. They’re made for deflection, so if you’re afraid to get hung up, you’re going to have a hard time fishing with the lure. But hey, if you’re scared of a couple of hang-ups, you probably should have stayed home.

How to Fish a Square Bill Crankbait

Unlike most crankbaits, the Square Bill is really an all-season lure. Anytime the bass can be found in the shallows is a good time to throw one out.

For the best results, I like to throw them into cover and bounce them off a piece of structure. The moment the crankbait hits the structure, it’s going to bounce off in an erratic manner. That bounce or erratic action is what’s really going to trigger the bass to strike.

What I like to do, is fish them fast and use deflection to trigger the strike. That combination of speed and deflection in shallow cover drives the bass nuts. The moment the lure bounces off the structure, I’ll pause for a second or two. That pause is when the lure performs its magic. It’s usually in that split second after the lure hits that you’re going to get the bass to strike, so be patient and really get a good feel for what you bait is doing.

Where to fish Square Bill Crankbaits

These are really not meant to be fished very deep. In my opinion, you should fish them in shallow areas with lots of cover. Look for stumps, rocks, vegetation or anything else you can bounce them off of. Remember your going after that bounce, so make sure you’re fishing in an area with good cover and structure.

Square bills are actually designed to deflect off of Wood, Rocks, Docks and other structure in the water.

When the bass are sheltered up in the weed lines, the Square bill crankbait can be a deadly lure to throw. Becuase they swim shallow, you can often skim them right on top of the weed line causing the bass to come up and nail them.

People are often intimidated by these lures; they’re scared to throw them where they need to go because they’re scared of getting hung up. I’m not going to lie to you and say you’re never going to lose one, but for the most part, the design usually allows these lures to bounce off of almost everything. So don’t be scared when fishing them, because it’s that bounce that you’re after.

Designed by professional bass angler, Kevin VanDam, these chunky crankbaits generate huge deflections off of cover and have helped KVD when his share of tournaments. If we throw these then most of the time we are going to tie on either a KVD 1.5. sexy shad or 1.5 Bluegill.

The Storm Arashi Silent Square Bill is great for silently running through shallow waters where a rattle might spook off finicky, pressured bass.

The 6th Sense CRUSH square bill crankbaits are great for crashing thick shallow cover, ripping out of grass, nailing rocks, or running in the shallows.

These are the newest of the bunch, but we really liked the Balsa-like action in these, so we had to add them to the list. They come in a bunch of colors, but Threadfin Shad is our favorite.