A 40-pound rockfish, caught by Henry Liebman off Sitka, AK, on June 25, is estimated to be at least 200 years old. 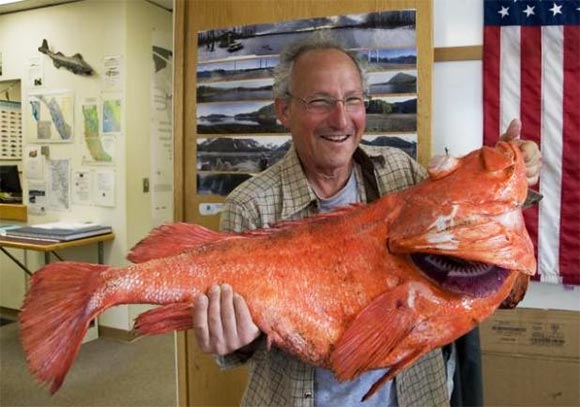 According to the Sitka Sentinel, the world record beat out the current 38.69-pound record rockfish, and may actually be older than 200 years.

Troy Tidingco, Sitka area manager for the state Department of Fish and Game, certified Liebman’s catch, and said this fish might be in the neighborhood of 200 years old. “The rougheye is the oldest-aged fish at 205,” Tydingco said. He said the longevity record for shortrakers, which are often confused with rougheyes, is 175 years. But that record fish, he said “was quite a bit smaller than the one Henry caught. That fish was 32 and a half inches long, where Henry’s was almost 41 inches, so his could be substantially older.”

Liebman says he plans to mount the fish. I get it, but at the same time, you’d have the most popular Fourth of July picnic in the neighborhood with those 40-pounds of 200-year-old deliciousness roasting on the barbie. Have a great holiday, and catch something epic!