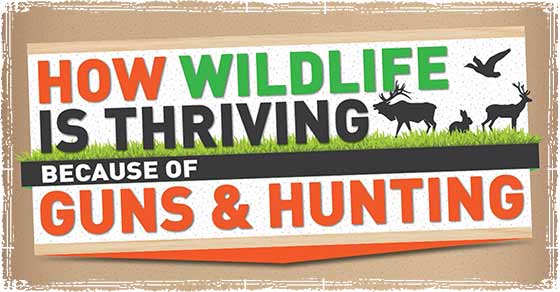 Since the late 1930s, hunters, target shooters and the firearms industry have been the nation’s largest contributors to conservation, paying for programs that benefit America’s wildlife and all who love the outdoors.

In fact, the U.S. Department of Interior just announced that firearms and ammunition manufacturers contributed a record $760.9 million in excise taxes in 2013 through the Pittman-Robertson Wildlife Restoration Program. So while the anti-gun nuts, and the morons over at PETA, continue to rant and rave about those evil guns, the fact is, those evil guns, and the hunters who use them, have done more to help wildlife than any of the idiots over at PETA have ever done.

NSSF has created a new infographic, “How Wildlife is Thriving Because of Guns and Hunting,” to illustrate how we as an industry and as sportsmen are the greatest contributors to wildlife conservation in America, providing nearly $9 billion over the past 76 years.