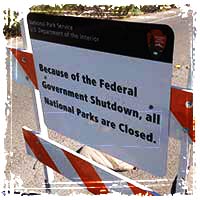 Just when you thought the government shutdown couldn’t get more absurd, the National Parks Service announced today that anyone entering any of the National Parks or National Wildlife Refuges faces a $5,000 fine and jail time of up to 6 months.

If you are caught within any of the National parks during the Government Shutdown, you could be charged with trespassing and will be subject to federal law, under which you could be cited or even jailed.

So our public lands that we pay taxes for are now being held hostage by a government that seems to have little concern for the people who use these lands. How restricting access to hikers, hunters, and fisherman is going to solve Washington’s problems is a mystery to me, but it looks likes outdoorsmen will be the ones taking the brunt of Washington D.C.’s Rage.

Hopefully someone with some sort of sense will be willing to do something, but it looks like we could be out of luck for quite some time as both sides of the political aisle continue to fight over the budget.

It’s really a sad time when the people can be punished into submission by taking away something that they have no right to take away – OUR GOD-GIVEN LAND AND WILDLIFE.