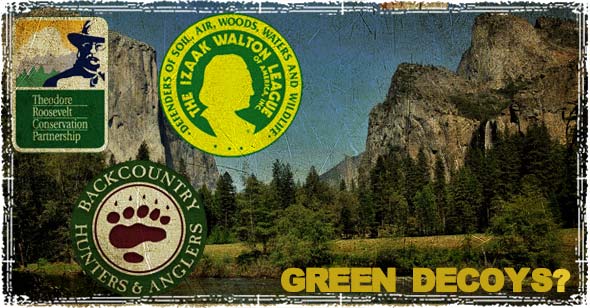 Environmentalists based in San Francisco and Chicago know that they wouldn’t have very much credibility with hunters and anglers in places like Montana or Utah. So they’re trying to package their political activism and messaging in camouflage. They’re funding a number of groups that appear to represent sportsmen, including the Izaak Walton League of America, Backcountry Hunters and Anglers, and the Theodore Roosevelt Conservation Partnership.

Who are these funders?

They include the anti-gun Joyce Foundation, on whose board Barack Obama sat for 8 years. They include billion-dollar environmental foundations in California that work to end affordable energy production for American families. Even Big Labor has gotten involved, funneling over $1 million to an effort to harm the NRA. Do they sound like friends of sportsmen?

I’ve been warning about these types of activists for years; they are the same groups who make it possible for the Bureau of Land Management to takeover large portions of State land throughout the west, and have helped pass regulations closing off millions of acres of land to hunters, backpackers, campers, and anglers.

The “Green Decoys” website seeks to expose the fact that camouflaged environmentalists are significantly engaged in ways hunters and anglers might not know about, whether it’s a new supposedly grassroots group or a more well-established group where grassroots members may not be aware of what’s going on at the national office. View the video here or visit www.GreenDecoys.com to learn more.