Yesterday while fishing, I seen something that I will not forget for some time – a teenager about 17 years old go under.

I was fishing a small cove at Lake Mead, Nevada when a teenager attempted to make the swim across the cove. The cove was about 2,000  – 3,000 feet across, but the wind and the current were both pretty strong.

About 5 minutes after the kid started his swim, I turned towards the cove when I heard people screaming. Just as I turned, I saw the kid go under, a mere 50 feet from his intended landing spot. I watched helplessly from across the cove as a group of 50 people just stood there.

Finally after what seemed like an eternity, which was actually no longer than 45 seconds, a couple people jumped in and eventually were able to pull the kid’s lifeless body to shore.

While I dialed 911, a friend that I was fishing with started running around the shoreline in an attempt to resuscitate the kid. Luckily, by the time he got there someone had managed to hit the kid hard enough to push most of the water out of his lungs. While he was still in pretty bad shape, he was able to open his eyes and squeeze someone’s hand.

I honestly have no way of knowing what happened to the kid. I hope he made it, but when the rescue teams finally got there, he seemed like he was still in pretty bad shape.

This whole event made me realize how quickly things can go bad out on the water. People simply don’t realize how dangerous even a small bit of wind or current can be.

Don’t underestimate the power of the Water

I don’t care how good of a swimmer you think you are, swimming out in the open water is entirely different from swimming in your backyard pool. Currents, undertows and winds are unpredictable and can stop you right in your tracks – worse yet, they can have devastating consequences if you’re not prepared.

If you get stuck in a powerful current, the last thing you want to do is swim against that current. Instead, try to swim or float with the current towards the closest bit of shoreline that you can see.

Time and time again, I see people taking stupid chances with their life while out on the water. From having no life jackets or flotation devices, to taking out boats that are entirely too small for the water they’re boating in, people just don’t take their safety seriously enough. It only takes a second for things to turn bad, and if you’re not prepared to deal with the situation, you’re putting your life in serious jeopardy.

You Need to be Ready to React.

In a group of over 50 people, only a few were able to react to the situation. Even worse, once they got the kid to shore no one was willing, or able to give the kid CPR. A stranger to the group jumped in, and managed to perform his own version of CPR and got the water out of the kid’s lungs. He told my friend, who managed to get across the cove right as the kid spit up the water, “I had no idea how to do CPR, I just kept pushing on his chest and the water finally came out.”

From across the Cove, I dialed 911. I was on the phone with the emergency dispatcher for over 5 minutes before someone in the group of 50 bystanders, who were right with the kid, finally had the presence of mind to dial 911. Had I not dialed 911, this was valuable time that could have been lost.

You need to know what you’ll do in an emergency situation before you ever step foot in the water. From the moment the kid went under, until the rescue teams actually got there and started attending to him, almost 45 minutes had passed.

In an emergency situation, timing is often one of the most crucial factors in determining the outcome of that situation.

This is the cove that the kid attempted to swim across…. Remember looks can be deceiving!

In the picture you can see the current coming in towards the shore, this is what he attempted to swim against. While it might not look like much in the picture, I can assure you that even this amount of wind and current can be almost impossible to swim against once you get out into the open water. NEVER UNDERESTIMATE THE POWER OF THE WATER. 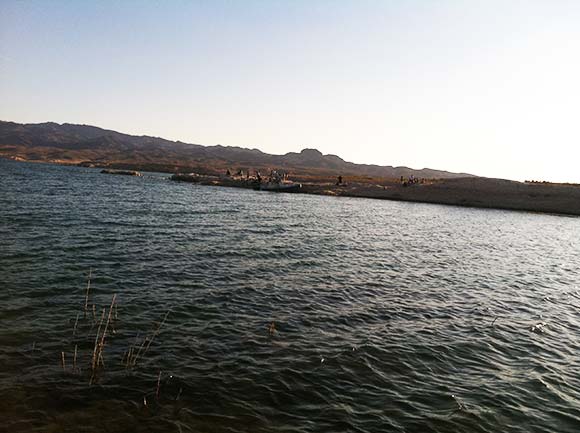 One last thing that I want to mention, is the importance of knowing exactly where you are while out on the water, or while out in the backcountry. The emergency dispatcher that I talked to had no idea where this area was, and I had to give her detailed instructions so she could relay that information to the emergency crews who were in route.