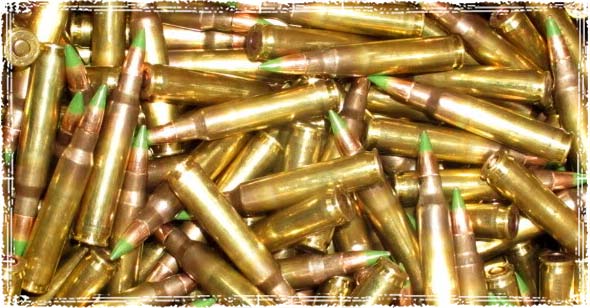 The Bureau of Alcohol, Tobacco, Firearms and Explosives (ATF) is in the process of banning 5.56 M855 and SS109 rifle ammunition by labeling it “armor piercing ammunition.”

Commonly available steel-core, “green tip” M855 and SS109 rifle ammunition has been exempt from federal law banning armor piercing ammunition for decades. The round is commonly used by people trying to save some money, and is regularly used for sporting purposes including target shooting. But now, thanks to some Anti-Gun politicians in Washington, those shooters may find themselves without their favorite money-saving round.

The ATF’s reasoning is bogus; the M855 is actually a pretty unimpressive round. In fact, the Army received numerous complaints about the M855’s stopping power during combat operations in both Iraq and Afghanistan, something that flies in the face of the ATF’s reasoning for pulling this round from the marketplace.

According to numerous battlefield accounts, the M855 round gave soldiers constant problems. When engaged with insurgents at less than 150 yards, the M855 rounds did not provide enough stopping power. In addition to not providing lethal stopping with two or more rounds, they did not effectively penetrate vehicle windshields, even with numerous rounds fired at extremely close range.

This ATF Regulation will affect all shooters

If the regulation is passed, everyone will be affected; as ammunition makers will have a hard time developing and selling alternative ammunition in other popular hunting rounds, such as .308 rifle hunting ammunition. This is going to make it hard on hunters, especially in California where a total ban on traditional ammunition for hunting is being phased in now.

We already have people pushing lead ammunition bans throughout the country, and now they want to start taking away ammunition that has been used for decades for sporting purposes. What’s next?

I know a number of people, some even in the hunting community, who have bought into the lie that this is about protecting police officers; it’s not. This is about gutting the 2nd amendment, and it will not stop at M855 ball ammunition.

If you believe this is about protecting officers, you better take a hard look at what they are banning because most of us hunters use ammunition that is far more powerful that the 5.56 M855 round.